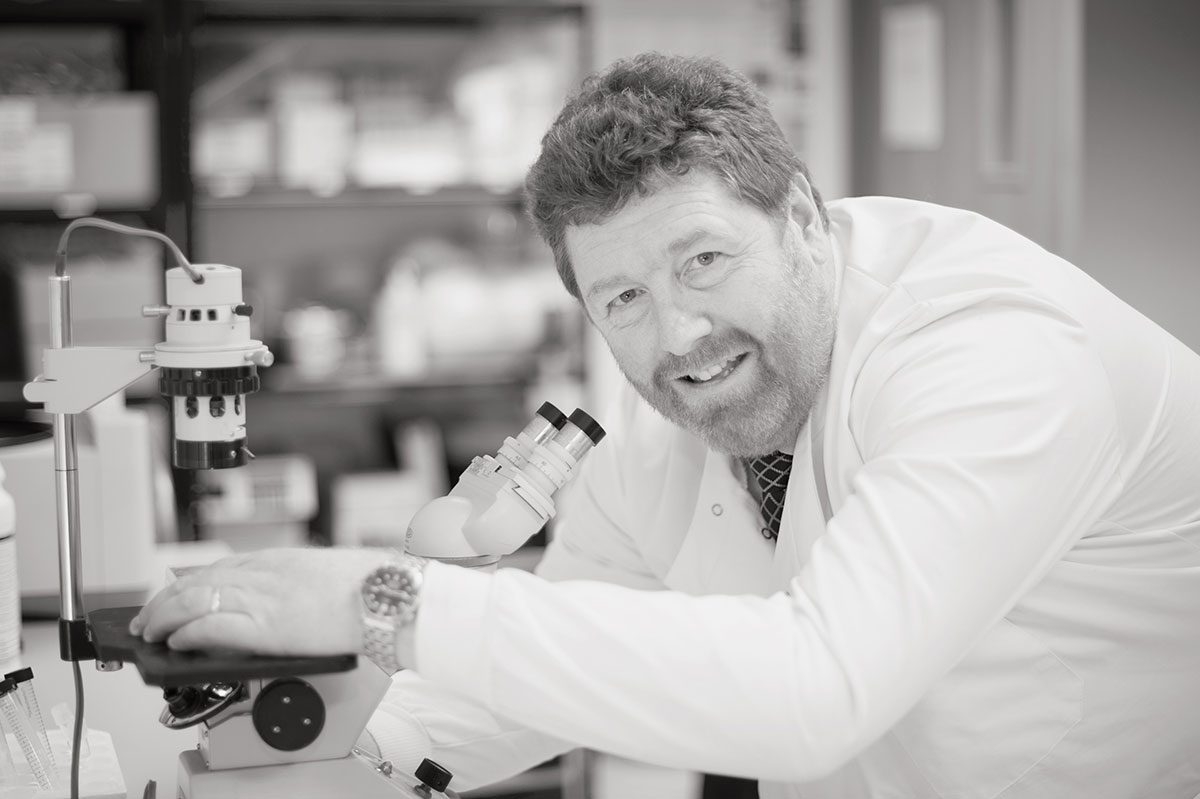 1. Tell us about your career before founding iosBio.

I was a relatively late starter into a scientific career. I have always been interested in science and microorganisms, but my interest wasn’t properly ignited until I undertook a technical qualification at a south Wales college. This led me to my undergraduate degree in Microbiology and Virology at Manchester University and subsequently on to a PhD in Molecular Virology from The Institute of Animal Health at Pirbright & Reading University. During my career I’ve covered a wide range of research areas including virology, cancer, gene therapy and genetic research at a number of institutions including University of Oxford, Marie Curie Research Institute, the Exotic Virus Research Laboratories at the Institute of Animal Health, and the Institute of Cancer Research.

2. How did you become interested in the field of virology?

There was always a boyhood fascination with microbiology, however my exposure to the undergraduate study of viruses re-focussed my interest and I became spellbound with how they work, are able to avoid the immune system and cause disease, and how vaccines can be used to eradicate those diseases. My first degree cemented that fascination, provided context and detail and instigated some of my early thinking of how to utilise the core features of viruses, i.e. essentially avoiding the immune system to deliver genetic information to cells, to immunise against infectious disease but also the potential to treat genetic diseases.

3. How did you come to develop iosBio’s proprietary OraPro™ technology?

Our original work at iosBio was aimed at alleviating the cold chain for vaccines, a system which often fails and leads to around 50% of all vaccines being wasted, largely due to storage at incorrect temperatures. The thermal stability our core technology provides to vaccines and viral vectors enables 25°C storage for years and 56°C for short periods of time – sufficient for cold chain free delivery to locations anywhere in the world. As we began developing our own viral vector-based pipeline we explored other routes of vaccine administration, which ultimately led to our OraPro™ technology.

4. Can you tell us a bit about how OraPro™ works?

Viral vectors are used to deliver DNA to a cell so a particular protein, such as a SARS-CoV-2 antigen or a therapeutic protein, can be produced from that cell to provide a patient with immunity or therapy. Typically, viral vectors are engineered to be non-replicating, that is they cannot make more viral vector copies of themselves within a patient’s cells, so preservation of vector activity is pivotal for maintaining efficacy.

When delivered via injection, a patient’s immune system will develop immunity to the viral vector, meaning subsequent uses of that viral vector will be less effective or have no effect in causing cells to produce the protein. However, as the gastrointestinal tract is home to a huge microbiome (bacteria, yeasts, viruses) it has intrinsic tolerance mechanisms which mean repeated use of a viral vector would be possible. However, viruses and viral vectors are typically very sensitive to both temperature and acidic environments – oral delivery of a vaccine relies on transit through the stomach for several hours at 37°C and a low pH, which would cause rapid breakdown of a viral vector.

Our OraPro™ platform combines both thermal and acidic protection for a non-replicating viral vector through the stomach and a controlled release in the small intestine where the viral vector can cause gut cells to produce antigens for vaccines or proteins for therapeutics. The oral delivery allows us to reuse our viral vector repeatedly without generation of an anti-vector response. When viewed from a patient and healthcare perspective oral medicines are much preferred and far easier to distribute.

5. Tell us about your role as Chief Innovation Officer. What does a typical day look like for you?

Whilst every day is different, typically there’s a lot of technical dialogue and data interpretation and providing scientific direction. We’re fortunate to run a closely knit scientific team where everyone supports each other & our work dovetails across our development programmes so technical debriefs are intellectually rewarding and push our science forward rapidly. I also dedicate a reasonable proportion of my time to developing new IP.

6. What excites you about iosBio?

The progression from a preclinical company into clinical company has been an incredibly rewarding time for us; building up the strength in depth of our team of scientists, expanding our manufacturing expertise to transition our technology from pilot/small scale to manufacturing at commercial scale with ImmunityBio has also been rewarding. Taking our oral delivery technology to address other vaccines and using it to increase vaccine coverage and improve their effectiveness will be incredibly exciting for me and the whole iosBio team.

7. What do you see as the biggest challenges facing vaccination programmes around the world?

The emergence of COVID-19, the rapid development of vaccines has shone a light on the two aspects that our technology address – thermal stability and reliance on needles for administration.

8. Why are oral vaccines poised to transform the future of vaccination?

Protection at the surfaces where most infectious diseases gain entry to their target is provided by the mucosal immune system. Typically, by administration of an injected vaccine a systemic level of immunity is provided, but limited mucosal immunity is generated – thus a pathogen can often still gain entry, replicate and cause onward transmission to those who are not vaccinated or immune. Oral vaccines engage with mucosal associated lymphoid tissue and Peyer’s patch to induce antibody and T cell responses both systemically and at the mucosal surfaces, ultimately resulting in enhanced protection.

From an administration perspective, oral vaccines are self-administered by the individual which means no physical contact required between the healthcare professional and the patient – in pandemic/epidemic situations this will reduce risk of transmission during the vaccination process. There’s also the possibility of vaccines being delivered by mail or door to door which has been successfully demonstrated in typhoid vaccine studies in Nigeria, Zambia and Guinea.

9. With no need for cold chain storage, tell us about the impact that oral vaccines can have on developing countries.

The WHO produced a report on vaccine wastage that showed around 50% of all vaccines are wasted. A large proportion of these are due to lack of temperature control and the logistics required for an unbroken cold chain. Thermally stable vaccines will mean all nations should have the ability to access effective vaccines for prevalent or emergent infectious diseases.

It’s also worth pointing out that this isn’t just an issue for developing countries, controlled cold chain logistics are prone to errors or failures – an audit within the USA found that 76% of vaccine centres exposed their vaccines to inappropriate temperatures, whilst in Korea recently they had to dispose of 5 million flu vaccine doses after they were stored at an incorrect temperature.

10. What are you hoping to achieve at iosBio?

The ultimate goal is to transform vaccinology through thermally robust vaccines, delivered without the need for needles, which provide the broadest immunity possible.


Enabling the fastest and most cost-effective deployment of vaccines the world has ever seen. This is not just a huge leap forward from a humanitarian perspective, oral vaccine technology also represents a significant commercial opportunity.

As the coronavirus pandemic rages on around the world, scientists are working day and night to create safe and effective vaccines that will allow life to return to normal. Although great leaps forward have been made, we are already seeing the supply chain and logistical problems of injectable vaccines that require cold or ultra cold chain storage. And as further mutations of the virus continue to emerge, the ability to tweak and readminister vaccines becomes ever more crucial.

iosBio has partnered with US pharmaceutical company ImmunityBio to create OraPro-Covid-19, deploying our ground-breaking oral vaccine delivery platform with the aim of creating a Covid-19 vaccine that can be sent by post and swallowed at home.

The global seasonal influenza market is forecast to be worth $4.3bn by 2025. This figure is unsurprising considering the enormous economic costs of flu each year.

On average, the total estimated annual economic burden of influenza to the US healthcare system and society is $11.2 billion, comprising $3.2 billion in direct medical costs and $8 billion in indirect costs. The CDC (Centre for Disease Control and Prevention) recommends that every person from the age of six months onwards has a flu vaccine, but actual vaccination coverage hovers around 50%

In the UK, six million working days are lost to seasonal influenza in an average winter, yet uptake amongst the under-65s has been steadily declining in recent years. Many cite difficulties with getting an appointment at their GP’s surgery, where the vast majority of flu jabs are still administered.

Zika virus disease is caused by a virus transmitted primarily by mosquitoes, as well as through sexual contact and from mother to fetus during pregnancy. Zika infection during pregnancy can cause infants to be born with microcephaly and other congenital malformations, and is also associated with other complications including preterm birth and miscarriage. An increased risk of neurologic complications is associated with Zika virus infection in adults and children, including Guillain-Barré syndrome, neuropathy and myelitis.

From the 1960s to 1980s, rare sporadic cases of human infections were found across Africa and Asia, typically accompanied by mild illness. The first recorded outbreak of Zika virus disease was reported from the Island of Yap in Micronesia in 2007. This was followed by a large outbreak of Zika virus infection in French Polynesia in 2013 and other countries and territories in the Pacific. In March 2015, Brazil reported a large outbreak of rash illness, soon identified as Zika virus infection, and later that year confirmed to be associated with microcephaly and Guillain-Barré syndrome.

close
We use cookies on our website to give you the most relevant experience by remembering your preferences and repeat visits. By clicking “Accept All”, you consent to the use of ALL the cookies. However, you may visit "Cookie Settings" to provide a controlled consent.
Cookie SettingsAccept All
Manage consent

This website uses cookies to improve your experience while you navigate through the website. Out of these, the cookies that are categorized as necessary are stored on your browser as they are essential for the working of basic functionalities of the website. We also use third-party cookies that help us analyze and understand how you use this website. These cookies will be stored in your browser only with your consent. You also have the option to opt-out of these cookies. But opting out of some of these cookies may affect your browsing experience.
Necessary Always Enabled
Necessary cookies are absolutely essential for the website to function properly. These cookies ensure basic functionalities and security features of the website, anonymously.
Functional
Functional cookies help to perform certain functionalities like sharing the content of the website on social media platforms, collect feedbacks, and other third-party features.
Performance
Performance cookies are used to understand and analyze the key performance indexes of the website which helps in delivering a better user experience for the visitors.
Analytics
Analytical cookies are used to understand how visitors interact with the website. These cookies help provide information on metrics the number of visitors, bounce rate, traffic source, etc.
Advertisement
Advertisement cookies are used to provide visitors with relevant ads and marketing campaigns. These cookies track visitors across websites and collect information to provide customized ads.
Others
Other uncategorized cookies are those that are being analyzed and have not been classified into a category as yet.
SAVE & ACCEPT